Oviraptor is a genus of small Mongolian theropod dinosaurs, first discovered by the paleontologist Roy Chapman Andrews, and first described byHenry Fairfield Osborn, in 1924. Its name is Latin for 'egg taker' or "egg seizer", referring to the fact that the first fossil specimen was discovered atop a pile of what were thought to be Protoceratops eggs, and the specific name philoceratops means "lover of ceratopsians", also given as a result of this find. In his 1924 paper, Osborn explained that the name was given due to the close proximity of the skull of Oviraptor to the nest (it was separated from the eggs by only 4 inches or 10 centimetres of sand). However, Osborn also suggested that the name Oviraptor "may entirely mislead us as to its feeding habits and belie its character". In the 1990s, the discovery of nesting oviraptorids like Citipati proved that Osborn was correct in his caution regarding the name. These finds showed that the eggs in question probably belonged to Oviraptor itself, and that the specimen was actually brooding its eggs, when it died at the nest. 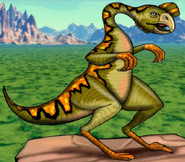 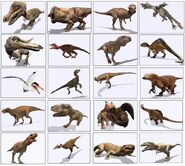 Retrieved from "https://parody.fandom.com/wiki/Oviraptor?oldid=2546149"
Community content is available under CC-BY-SA unless otherwise noted.