The Parody Wiki
Register
Don't have an account?
Sign In
Advertisement
in: Characters, Animals, Extinct Animals,
and 56 more

Pachycephalosaurus wyomingensis was the largest of the pachycephalosaurids—"thick-headed dinosaurs"—which featured extremely thick skullcaps. The top of a Pachycephalosaurus (Say it: pack-EE-SEFF-uh-low-sore-USS) skull could be 9 inches (23 centimeters) thick, and much of the skull and the snout were also covered by small bony knobs and spikes. The dinosaur's distinctive domed cranium was so stout that it sometimes survives as a fossil when the rest of the skeleton degrades. Some scientists have postulated that Pachycephalosaurus' padded skull allowed these animals to engage in head-butting battles of dominance perhaps related to mating, much like bighorn sheep and other modern animals do. Scars on fossil remains have been interpreted as reinforcing this hypothesis, though other research is contradictory. The dinosaur's neck vertebrae might not have been strong enough to survive such collisions without breaking. Pachycephalosaurus's dome, like the large horns and antlers of some modern animals, may have provided potential mates with a powerful visual cue of reproductive prowess. Pachycephalosaurus probably fed on low-lying plants relatively close to the ground. 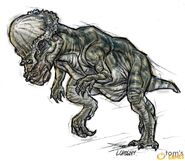 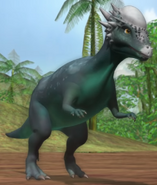