The Parody Wiki
Register
Don't have an account?
Sign In
Advertisement
in: Characters, Animals, Extinct Animals,
and 30 more

Pachyrhinosaurus (meaning "thick-nosed lizard") is an extinct genus of centrosaurine ceratopsid dinosaurs from the Late Cretaceous period of North America. The first examples were discovered by Charles M. Sternberg in Alberta, Canada, in 1946, and named in 1950. Over a dozen partial skulls and a large assortment of other fossils from various species have been found in Alberta and Alaska. A great number were not available for study until the 1980s, resulting in a relatively recent increase of interest in the Pachyrhinosaurus. Three species have been identified. P. lakustai, from the Wapiti Formation, the bonebed horizon of which is roughly equivalent age to the upper Bearpaw and lower Horseshoe Canyon Formations, is known to have existed from about 73.5-72.5 million years ago. P. canadensis is younger, known only from the lower Horseshoe Canyon Formation, about 71.5-71 Ma ago. Fossils of the youngest species, P. perotorum, have been recovered from the Prince Creek Formation of Alaska, and date to 70-69 million years ago. The presence of three known species makes this genus the most speciose among the centrosaurines. 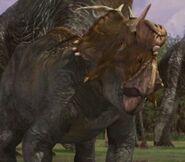 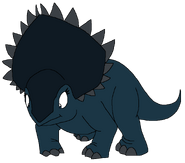 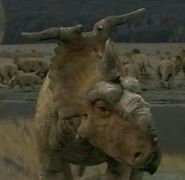 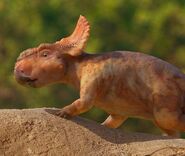 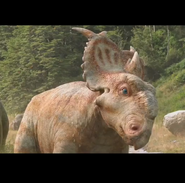 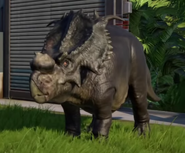 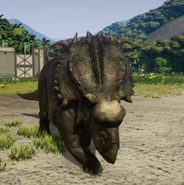 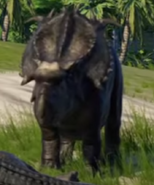 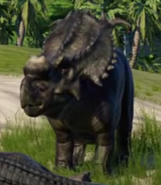 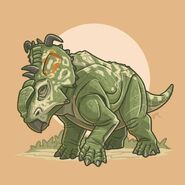 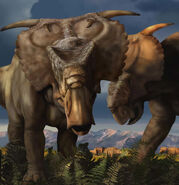 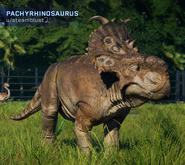