The Parody Wiki
Register
Don't have an account?
Sign In
Advertisement
in: Characters, Animals, Extinct Animals,
and 25 more

Paraceratherium, Indricotherium, or Baluchitherium is an extinct genus of hornless rhinoceros, and the largest terrestrial mammal that has ever existed. It lived from the early to late Oligocene epoch (34–23 million years ago); its remains have been found across Eurasia between China and the former Yugoslavia. Paraceratherium is classified as a member of the hyracodont subfamily Indricotheriinae. Paraceratherium means "near the hornless beast", in reference to Aceratherium, a genus that was once thought similar. 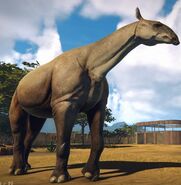 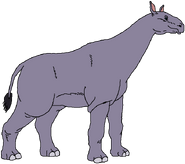