The largest chameleon in the world, Parson’s chameleon (Calumma parsonii) belongs to a unique family of lizards exhibiting some bizarre traits. With a large, triangular head, conical, independently-moving eyes, laterally compressed body, and fused toes, the chameleon has looks as strange as its behaviour. All chameleon species are capable of colour change, which is not only for camouflage as is generally assumed. It may also be a response to other chameleons (when fighting or mating), temperature, as well as the surroundings. Particularly comical when walking, they have an odd gait, moving with diagonally opposite limbs. The toes are fused into two opposable pads, giving mitten-like feet that are efficient for gripping branches. The tongue may be up to twice the length of the body, and has a bulbous sticky tip which is used to catch its prey. This enormous chameleon has ridges running from above the eyes to the nose forming two warty horns. Its colour varies from green, turquoise and yellow, and juveniles may have an orange sheen. The lips and eyelids of adults are sometimes yellow or orange and there may be pale yellow or white spots on the flanks. 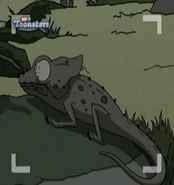 Add a photo to this gallery
Retrieved from "https://parody.fandom.com/wiki/Parson%27s_Chameleon?oldid=2068820"
Community content is available under CC-BY-SA unless otherwise noted.