The Parody Wiki
Register
Don't have an account?
Sign In
Advertisement
in: Characters, Animals, South American Animals,
and 27 more

The Patagonian mara (Dolichotis patagonum) is a relatively large rodent in the mara genus Dolichotis. It is also known as the Patagonian cavy, Patagonian hare, or dillaby. This herbivorous, somewhat rabbit-like animal is found in open and semiopen habitats in Argentina, including large parts of Patagonia. It is monogamous, but often breeds in warrens shared by several pairs. The Patagonian mara resembles a jackrabbit. It has distinctive long ears and long limbs. Its hind limbs are longer and more muscular than its fore limbs and it has a longer radius than humerus. The feet are compressed, making them hoof-like. The fore feet have four digits while the hind feet have three digits. Its tail is short, depressed, and hairless. It has a gray dorsal pelage with a white patch on the rump separated from the dorsal fur by a black area. In addition, the mara has a white underside with a somewhat orange flank and chin. The average Patagonian mara has a head and body length of 69–75 cm (27–30 in) with a tail of 4–5 cm (1.6–2.0 in). It weighs 8–16 kg (18–35 lb). Unlike most other cavids, such as guinea pigs and capybaras, the anal glands of the mara are between the anus and the base of the tail rather than being anterior to the anus. Patagonian maras are found only in Argentina, from 28 to 50°S. They prefer to live in habitats with shrub cover, but they also inhabit overgrazed and barren soils in the Monte Desert biome. In northwestern Argentina, they primarily inhabit lowland habitats such as forest and creosote bush or larrea. Maras prefer sandy and low shrub habitat in Valdes Peninsula. They have adapted well to a cursorial lifestyle on the open plains and steppe, with long legs, reduced clavicle, and well-developed sensory organs making them capable of running and communicating in these open habitats. When running, maras have been compared to deer and antelope. Maras are largely herbivorous. They feed primarily on green vegetation and fruit. In the Monte Desert, monocots make up 70% of their diet, while dicots make up 30%. Preferred grass species eaten are those of the genera Chloris, Pappophorum, and Trichloris, while dicots that are eaten include Atriplex lampa, Lycium spp., and Prosopis spp. Maras are primarily diurnal and around 46% of their daily activities involve feeding. Their temporal activity rhythms are related to environmental factors. Light, precipitation, and temperate have positive effects on annual activities, while darkness and relative humidity have negative effects. The daily activity of maras is unimodal in winter and biomodal in other seasons. Their preferred temperature is around 20 °C (68 °F)C. Females spend more time feeding than the males, due to the demands of gestation and lactation. Males spend most of the day sitting, being vigilant for predators. Predators of maras, particularly the young, are felids, grisons, foxes, and birds of prey. Maras are also hosts for parasites such as the nematode worm Wellcomia dolichotis. 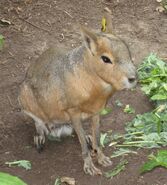