The patas monkey (Erythrocebus patas) is the fastest primate on Earth, reaching top speeds of 55 kilometres per hour. Its build is well suited to this fantastic sprinting ability, with long limbs, a slender body, and a deep chest. Male patas monkeys are generally more brightly coloured than females, with white on the backs of their hind legs and a white rump, which contrasts with their otherwise reddish and grey body colour. The male patas monkey also has a mane and very long white whiskers, and averages about twice the size of the female. Females are duller in colour and lack manes and long white whiskers. Both the male and female patas monkey have a dark tail and a pale white to grey face, and often have a distinctive bluish nose. A dark stripe above the eyes contrasts with the reddish cap on the head, and the undersides of the body and tail are whitish to grey, cream or buff. The patas monkey has a varied repertoire of alarm calls to indicate the presence of specific types of predator, aiding the group’s escape. Adult male ‘bark-grunt’ calls that signal the presence of a mammalian predator are distinctly different to those given by adult females, juveniles and infants, who signal the presence of a mammalian predator with a ‘nyow’ call. ‘Chutter’ alarm calls are given in response to the presence of smaller mammalian predators. Groups of female patas monkeys typically use a ‘moo’ call to stay in contact while on the move. The patas monkey is the largest monkey to have a diet consisting primarily of small arthropods and gum. 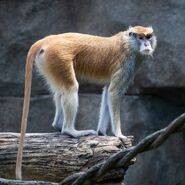 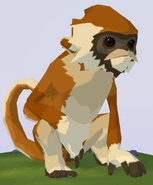