The Parody Wiki
Register
Don't have an account?
Sign In
Advertisement
in: Characters, Heroes, Male Characters,
and 13 more

Patch Treasurechest is the greatest collector of treasure in all of Lalaloopsy Land. He's a clutterbug, who loves to collect shiny things. He also likes to travel, but he has trouble following maps. His name is based off of his signature eye-patch he wears, as well as his bountiful chest of valuable treasure he has amassed.

Patch is a fair-skinned boy with peach-pink cheeks and black eyes. He wears a black eye-patch over his left eye. He has ear-length golden locks of hair worn in plain curls.

Patch's attire is very pirate-like. It consists of a red and black striped T-shirt with a skull and crossbones icon at the center over a plain white long sleeved shirt. His khaki shorts end below the knee. His shoes are plain black and white tennis shoes.

Patch's pet is a parrot. Its body is green with a yellow tummy and feet along with an open yellow beak and red feathers on top of its head. It has a big white marking around both black eyes, one of which is winking.

Main article: Patch's shiphouse Patch's home is a ship cut in half with a giant treasure chest in the middle connecting the ship to a base. He hides his treasures in his home and lives on a beach. His parrot has its own giant cage. 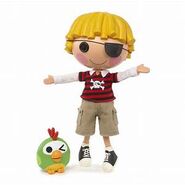 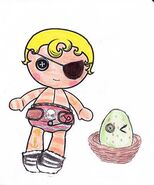