The Parody Wiki
Register
Don't have an account?
Sign In
Advertisement
in: African American Characters, Females, Female Characters,
and 96 more

Penny Proud is the lead protagonist of Disney Channel's The Proud Family show.

She is an 14 year old girl who lives in Wizardville, California with her mom, dad, brother and sister.

Penny also gets into mischievous adventures with her friends while dealing with ''cool'' crowds.

Her grandmother visits everyday and often spends the night with her pet poodle . She is a typical, and average teenager who tries to live the life she dreams of, but her parents (particularly her father) does not allow her from dating boys. Penny loves her family dearly, but often finds herself embarrassed by the way her father, Oscar Proud, acts in public, how her mother Dr. Trudy Proud coddles her, and annoyed by the fact that she's often stuck having to babysit the twins Bebe and CeCe, which keeps her from being able to go out with her friends. Suga Mama is seriously quick, and helpful to stand up for her grandbaby and she is usually someone Penny goes to whenever she feels her parents are being unreasonable.

that is always in low twin pigtails by two dark black/pink hair ties with a single hair strand sticking up, a beauty mark under her left eye and brown lips.

Her closet is full of the same exact combination of clothes.

Sometimes while swimming, she often wears a dark red one-piece swimsuit and once wore black one.

Penny respects her parents and usually listens to them, but she often caves in to peer pressure. She can be a bit obstinate, and it leads her into undesirable situations from time to time; a trait inherited from her father, who once told her to always stand up for what she believes in. Ironically, Penny is often distressed with her father who adopts an authoritarian parenting style which clashes with Penny's strong willed personality. He is especially strict whenever it comes to Penny associating with boys which opens up a lot of opportunities for a teenage girl like her to get into trouble. She happens to be closer to her mom who adopts a democratic parenting style and seems to respect Penny's feelings more by allowing her to have a voice.

She is also a natural born leader and tends to act as such in her friend group much of the time. She gives inspirational speeches that often get the people around her engaged and willing to help support her beliefs and causes. She proved herself to be a talented singer as a member of LPDZ and her talents eventually land her a brief career as a solo singer and actress for Wizard Kelly Studios under the name ''Penné'' until she quits after falling out of character and then missing her old lifestyle 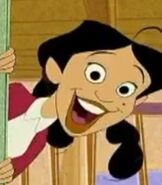 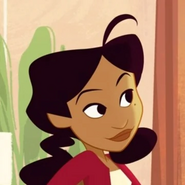