The Parody Wiki
Register
Don't have an account?
Sign In
Advertisement
in: Characters, Animals, Extinct in the Wild Animals,
and 19 more

Almost driven to extinction, this deer now only survives in captivity. Pere David’s deer (Elaphurus davidianus) is named after Father (‘Pere’ in French) David, who observed the last remaining Chinese herd and inspired a drive to bring them back from the brink of extinction. The Chinese people call this mammal ‘sze pu shiang’ which translates as ‘none of the four’. This strange name refers to the deer’s appearance as it looks like it has the neck of a camel, hooves of a cow, the tail of a donkey, and antlers of a deer. Indeed it does have a donkey-like tail which ends in a black tuft, and the ‘neck of a camel’ description refers to the long slender neck of this deer. The head is also unusually long and slender, with small pointed ears and large eyes. Adult males (stags) do bear antlers and, unusually, there may be two pairs of antlers per year. The summer antlers are the larger set, and are dropped in November following the rutting season. The second set then appear in January and are lost a few weeks later. Unique among deer, this species has antlers with a main branched anterior segment, with the points extending backwards. This deer’s summer coat is reddish tan in colour and becomes woollier and dark grey in the winter. The underside is a cream colour and along the spine there is also a distinctive darker stripe. Juveniles are spotted with pale flecks. 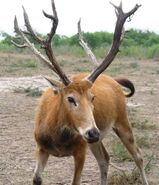 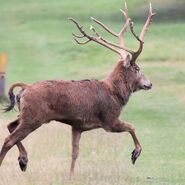 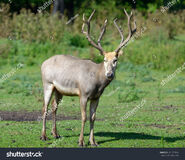