The Parody Wiki
Register
Don't have an account?
Sign In
Advertisement
in: Characters, Animals, Australian Animals,
and 29 more

Also known as a monitor or a goanna, the perentie (Varanus giganteus) is Australia’s largest lizard. It has creamy colouration, becoming browner on the upperparts with age, occasionally with a reddish tinge. The body and tail are darkly speckled and have transverse bands of pale, dark-edged spots, occurring from the neck to two-thirds of the way down the tail. The perentie has black lines on the throat, and its long neck has unique spot patterns that can be used to identify individuals. The perentie’s snout is long and is flattened at the end, and this species has a forked tongue and sharp, slightly curved teeth. Its powerful legs are dark brown and end in five clawed toes, while the tail is laterally compressed and extremely strong. 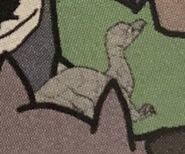 Perentie From Australia’s Improbable Animals “It was used as Stock Footage in Really Wild Animals”.