The Parody Wiki
Register
Don't have an account?
Sign In
Advertisement
in: The Brady Bunch Characters, Brothers, Younger Brothers,
and 20 more

Peterson Christian Edward "Peter" Brady, the second of the Brady boys, appeared in The Brady Bunch TV series, as well as all of the subsequent TV show spinoffs, TV specials, and the two box-office smash feature films, The Brady Bunch Movie in 1995, and its sequel, simply titled A Very Brady Sequel in 1996, where he was played by actor turned reality TV show producer/director Paul Sutera. The part of Peter is best recognized for being played by Christopher Knight on the ABC-TV series, and the Made-for TV films The Brady Girls Get Married (NBC-TV, in 1981) and A Very Brady Christmas (ABC-TV, in December 1988). Peter was also played by actor Blake Foster in the 2002 FOX made-for-TV-movie The Brady Bunch in the White House.

Also known as "Pete," Peter was born on 5 July 1958 the second child of Mike Brady and the late Sarah Brady, who became Carol's stepson when she wed Dad Mike in The Brady Bunch TV series' pilot episode. He is the third oldest of the Brady Family. Peter is the middle Brady son and is very close to his brothers Greg and Bobby. He loves to joke around with Marcia and Jan and is very protective of Cindy.

He has a fragile ego that manifests itself in extremes; often he lets his achievements go to his head while at the same time lets little things get him down. He tries to remain humble when he rescues a little girl from a falling shelf of toys, but after being called a hero, he goes overboard with self-importance, only to have his feelings hurt when nobody initially attends his hero party. Not long after, he decides he has no personality when a kid at a party called him dull, not realizing that his sweet, shy nature is what makes him himself.

The clumsiest of the bunch, he sometimes gets overexcited and acts impulsively before thinking. Peter is anything but dull. He may not be too great at fixing bikes or making ice-cream sundaes, but he builds a mean model volcano. He's also great detective and a pretty good reporter. Peter even proves himself to be a fine actor by playing Benedict Arnold in the school play, a role he later lives to regret. Nevertheless, he is a fun-loving boy whom girls adored later in the original series.

He has a non-related twin named Arthur Owens (also played by Christopher Knight), who is shown in the episode "Two Petes in a Pod" which had the plot of Peter having two dates at the same time.

Peter is the only one in the family with brown eyes - all the others had blue or green eyes.

Peter later joined the military for career guidance, as seen in NBC-TV's The Brady Girls Get Married. In later sequels, he is an administrative assistant (at one point, working under his fiancée, Valerie; they later end their engagement), and still later, a business partner with Bobby. Peter was the only Brady child to not have a spouse or significant other when The Bradys was cancelled. A little later, after sister Cindy married David Johnson, Peter came to Monticello, where David talked him into joining the county sheriff's department as a deputy under Sheriff Pat Moriarity; he later ran for the office of sheriff after Moriarity retired,and won! And one last thing: while still a deputy, he married a police detective named Chris, and adopted her nine year old son! 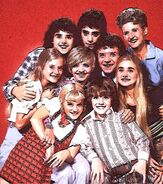