The Parody Wiki
Register
Don't have an account?
Sign In
Advertisement
in: Mature, Heroes, Antagonists,
and 83 more

Peter Löwenbräu Griffin, Sr. is the protagonist of the show and title character. He's a man of Irish descent currently residing in Rhode Island with his wife Lois. He was, however, born in Mexico, where his mother had tried unsuccessfully to abort him. Peter attended Providence High School. Together, Peter and Lois have three children, Chris, Meg, and baby Stewie. In addition, he and Lois had a child named Peter Griffin Jr.. who died when Peter shook him too much. Out of pity he also adopted an intellectual talking dog named Brian who formerly lived on the street as a stray, an accepted fact in Brian's two adoption stories.Peter's best friends are Glenn Quagmire, Joe Swanson, Brian, and Cleveland. They enjoy hanging out at their local bar, The Drunken Clam, drinking and chewing the fat. The four men (often without Brian, although he has joined them on several occasions) do many things together. Once the four friends entered and won a costume contest at an 80s TV convention, dressing up as the A-Team. On another occasion, their fishing boat was wrecked, and they were stranded together on a desert island.

He is a Critic

He is a naughty boy who smoke cigars

He is a Sea Star

He is a Clown 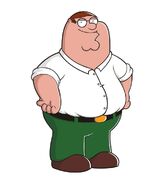 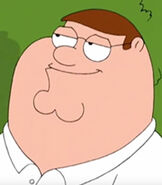