The Parody Wiki
Register
Don't have an account?
Sign In
Advertisement
in: Characters, Animals, Asian Animals,
and 3 more

The Philippine tarsier (Carlito syrichta), known locally as mawumag in Cebuano and other Visayan languages, magô in Winaray and mamag in Tagalog, is a species of tarsier endemic to the Philippines. It is found in the southeastern part of the archipelago, particularly on the islands of Bohol, Samar, Leyte and Mindanao. It is a member of the approximately 45-million-year-old family Tarsiidae, whose name is derived from its elongated "tarsus" or ankle bone. Formerly a member of the genus Tarsius, it is now listed as the only member of the genus Carlito, a new genus named after the conservationist Carlito Pizarras. Its geographic range also includes Maripipi Island, Siargao Island, Basilan Island and Dinagat Island. Tarsiers have also been reported in Sarangani, although they may be different subspecies. It was introduced to Western biologists during the 20th century. 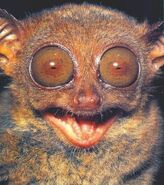