The Parody Wiki
Register
Don't have an account?
Sign In
Advertisement
in: Disney, Lilo and Stitch Characters, Lilo & Stitch Animals,
and 14 more 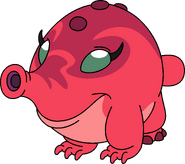 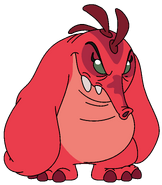 Phoon, A.K.A. Experiment 540, is an illegal genetic experiment created by Jumba Jookiba and a character in the Lilo & Stitch franchise. She is designed to generate devastating, typhoon-like winds; in her mutated form, she has enhanced strength and can fire projectiles at enemies, while her blasts are more powerful. Her one true place is creating winds for windsurfers at the beach.

Charles "Charlie" Brown, he is currently an 'ohana to Phoon

Sally Brown, she is also one of the 'ohana to Phoon

Snoopy and Woodstock, also both of them are an 'ohana to Phoon

Outside of Lilo and Stitch series, her current 'ohana, a new friends, and also another playmate, were Charlie Brown, his sister Sally Brown, and his pet and its friend Snoopy and Woodstock (from Peanuts Series). Phoon was discovered by Charlie Brown while he was sitting under the Kite-eating Tree, still thinking how he will flew his kite properly and without failing. After seeing his kite, Phoon started to offer her help to him to flew his kite, by gently blowing a right amount of air, making his kite really fly in the process. On his succession, other kids, including his pet Snoopy, and its friend bird, Woodstock was happy for Charlie Brown, making other kids gain attention to him, while Phoon still continues to blow, which however, making Lucy van Pelt jealous. After he makes an impression, Charlie Brown take Phoon home, and also introducing her to his pet and its friend bird, and together they played for a while. The next day, Jumba, came to the baseball field, and seeing Charlie Brown and Snoopy, playing. He caught Charles attention when he was asking if he does seen an elephant like genetic experiment who has the function to blow really hard and causes a typhoon like wind, which Charles and Snoopy thinking that it was Phoon, the one who met by Charles at the park the other day. After knowing that Jumba was looking for her, Charlie Brown and Snoopy brought Jumba to their home, only to found out that Woodstock and Charlie Brown's little sister, Sally Brown, was playing with her. Jumba finally met up with Phoon, and he decided to somehow, bring her home and stay with him on its new shelter, which makes Charles, Sally, Snoopy, and Woodstock was saddened to hear about it, thinking that they have no longer having a new playmate if Jumba takes her away with them, but also knowing it was for her own good. Jumba also explained that Phoon is way bit dangerous, because if it was mutated, she will be more destructive if she'd stayed with them. When Charlie Brown agreed to take Phoon with Jumba, they left and Jumba thanking them to look after Phoon. But somehow, Phoon herself wants to stay with Charlie Brown, so she forced herself to let go from Jumba's arm, and running back towards to Charlie Brown, Snoopy, Sally, and Woodstock, crying, which indicates that she doesn't want to go with him, and instead wants to stay with Charloe Brown and the others. Even though he was wee bit confused, and having no choice, and also shaping on his mind that Phoon was somehow found its new 'ohana, he turned back to Charlie Brown, Snoopy, Woodstock, and Sally and finally offered them to let Phoon stayed with them, since he does clearly seen that she really wants Charlie Brown since they've met the other day. Charles was doubtful at first since he already knew through Jumba's explanation that Phoon is way bit dangerous if it was mutated, but Jumba later pointed out to them that Phoon maybe dangerous, but she can be tamed (if ever she was mutated again), just by rocking her and sang her a lullaby and put it to sleep. Finally, after the kids, and their pet and its friend bird heard on what will they do to her if ever its powers will be destructive if provoked, Charlie Brown agreed to take good care of Phoon, since she does seem.like Charlie Brown and his family. Phoon is now staying with the Browns, serving as Charlie Brown's kite flying buddy, and also Snoopy, Woodstock, and Sally's playmate if Charlie Brown wasn't around, or whenever both Sally and Charles are at school, studying.