The Parody Wiki
Register
Don't have an account?
Sign In
Advertisement
in: Railway Series-only Characters, Diesel locomotives, Bo-Bo,
and 17 more

When Gordon took a railtour to Carlisle, Pip and Emma were asked to take the Express back to Tidmouth for him. Pip's cooling system was faulty, but Emma was in order and so off they went. Unfortunately, Emma failed near Crovan's Gate and James had to pull them back home. The engines were quick to befriend Pip and Emma, and after Gordon had returned, Douglas took them back to Barrow-in-Furness.

In 1995, Pip and Emma were borrowed to take the Prince of Wales and some guests to Tidmouth for the Railway Series' Golden Jubilee.

In 2011, the Fat Controller purchased them to run a faster express service to London following Privatisation, with them being able to complete a complete round trip every day, something barely attainable prior. He had been intrested in purchasing them since at least 2005. As a single unit, they are necessarily somewhat restricted im their use, but Sir Topham Hatt considered this a price worth paying for their services. They brought Prince Charles to unveil a bust of the Thin Clergyman at Tidmouth in celebration of the Clergyman's one-hundredth birthday.

Pip and Emma are kind and friendly. They quickly became good friends with the other engines. Although they suffered problems with their cooling systems, they are efficient and reliable.

Pip and Emma are based on the British Rail Class 43 HST. This class holds the world record for fastest rail speed for a diesel-electric locomotive: 238 km/h or 148 mph, which was set in 1987. The High-Speed Post Train is another member of this class. The majority of these are still in service.

Pip and Emma are painted in the original InterCity 125 livery of yellow and blue. Their rear ends and their BR Mk3 coaches are painted blue and white. After they were bought by the Fat Controller, the words "InterCity 125" and the BR logo which were painted on Emma's sides were replaced by "NWR" and red nameplates, with her name in gold. At the start of Thomas and his Friends Pip is seen wearing her old BR guise, it is unclear as to whether or not she eventually had these replaced by the letters "NWR", or if she later received nameplates. 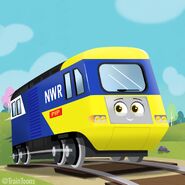 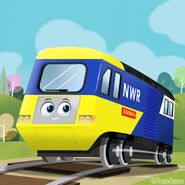