Plateosaurus is a genus of plateosaurid dinosaur that lived during the Late Triassic period, around 214 to 204 million years ago, in what is now Central and Northern Europe. Plateosaurus is a basal (early) sauropodomorph dinosaur, a so-called "prosauropod". As of 2011, two species are recognized: the type species P. engelhardti from the late Norian and Rhaetian, and the slightly earlier P. gracilis from the lower Norian. However, others have been assigned in the past, and there is no broad consensus on the species taxonomy of plateosaurid dinosaurs. Similarly, there are a plethora of synonyms (invalid duplicate names) at the genus level. 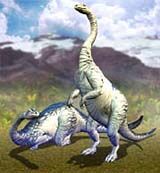