This special focuses on June's infatuation with Pablo, and her willingness to do anything to win his affections away from his unshakable devotion to classical music, particularly Beethoven.

Frustrated in her repeated failures to get Pablo's attention (by, among other things, demonstrating that Beethoven now comes in spray cans), she opens up to D.W. and Isa about her situation, and Isa comes up with an idea to get June in good with Pablo: invite him to play his piano in concert at the upcoming PTA program. June goes along with the idea and goes back to tell Pablo, who warms up to the idea, and after thanking June begins rehearsing right away.

The fact that Pablo thanks her for the invite is enough to send June skyrocketing into cloud nine, randomly hugging Frosty and Benny in total euphoria. On her way back home, June runs into Isa again and thanks her for the idea, but Isa mentions something she forgot to tell June before: That Pablo cannot play any Beethoven in the program; the PTA decided they want a rock concert instead.

June anguishes over this revelation, knowing well that Pablo will never agree to it, so she asks Benny, Frosty and Thomas for help. Frosty comes up with an idea: He brings out a set of drums, an acoustic guitar, an upright bass, and the three start playing with June dancing.

Moments later Pablo walks by, and June — in an attempt to save face — introduces the combo as his backup band for him for the PTA concert. But Schroeder, still thinking he will be playing Beethoven, insists he can handle it alone, but when June tells him that the PTA wants a rock concert instead of a classical recital, Pablo backs out, just as expected. But after coercing from Benny, Pablo reluctantly changes his mind. During their initial rehearsal, Pablo cannot bring himself to stomach the fact that he has sold out his beloved Beethoven.

The night of the PTA meeting comes, and the combo is tuning up their instruments for the concert. Pablo arrives close to show time, but despite June and Isa's pleading, he decides to stick to his guns and refuses to perform, reinforcing his belief that playing rock music would be compromising his classical roots. So now it is Isa who has the dilemma—a PTA meeting without a program. But June has a solution: Holding up a spray can, she says PTA meetings now come in spray cans, too.

On the final scene, June visits Pablo again and somehow offends him about Beethoven not making it in Nashville and that he did not have the Nashville sound. Pablo leaves feeling insulted by this. June then yells out to him, "He probably would not have made it in New Orleans, either!" June then takes out her radio and happily listens to rock and roll on Pablo's piano as the credits roll. 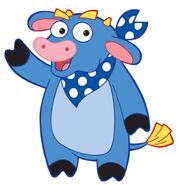 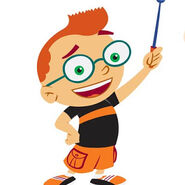 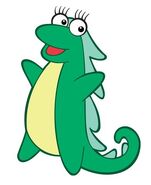 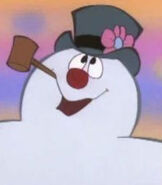 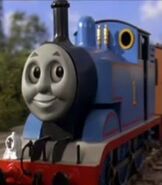 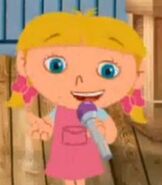 Pablo as Schroeder
Add a photo to this gallery
Retrieved from "https://parody.fandom.com/wiki/Play_It_Again,_Benny?oldid=1052403"
Community content is available under CC-BY-SA unless otherwise noted.