The Parody Wiki
Register
Don't have an account?
Sign In
Advertisement
in: Characters, Male Characters, Animals,
and 7 more

Porkchop is Doug's dog. He is anthropomorphic except he's still just a normal dog. He speaks in a series of barks and other dog sounds and he also communicates by body language, facial expressions, and hand gestures. Since he was given to Doug when he was one year old on Christmas morning, he is able to sense what Doug is feeling and saying. Unlike his owner, he is very outgoing and doesn't hesitate to dive into adventure.

His home is a fully equipped and furnished fake igloo in the Nickelodeon version and a tepee in the Disney version. He also has a mailbox, clothes, a Walkman and many other human possessions. It is possible Porkchop could be a parody of Snoopy or Garfield.

Doug Funnie is the closest to Porkchop, but he generally gets along with everybody except for Roger Klotz and his cat, Stinky. 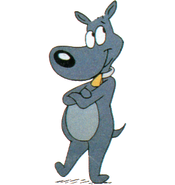