The Parody Wiki
Register
Don't have an account?
Sign In
Advertisement
in: Characters, Animals, Ocean Animals,
and 55 more

Anyone unfamiliar with the biology of the venomous Portuguese man-of-war (Physalia physalis) would likely mistake it for a jellyfish. Not only is it not a jellyfish, it's not even an "it," but a "they." The Portuguese man-of-war is a siphonophore, an animal made up of a colony of organisms working together. The man-of-war comprises four separate polyps. It gets its name from the uppermost polyp, a gas-filled bladder, or pneumatophore, which sits above the water and somewhat resembles an old warship at full sail. Man-of-wars are also known as bluebottles for the purple-blue color of their pneumatophores. The tentacles are the man-of-war's second organism. These long, thin tendrils can extend 165 feet (50 meters) in length below the surface, although 30 feet (10 meters) is more the average. They are covered in venom-filled nematocysts used to paralyze and kill fish and other small creatures. For humans, a man-of-war sting is excruciatingly painful, but rarely deadly. But beware—even dead man-of-wars washed up on shore can deliver a sting. Muscles in the tentacles draw prey up to a polyp containing the gastrozooids or digestive organisms. A fourth polyp contains the reproductive organisms. Man-of-wars are found, sometimes in groups of 1,000 or more, floating in warm waters throughout the world's oceans. They have no independent means of propulsion and either drift on the currents or catch the wind with their pneumatophores. To avoid threats on the surface, they can deflate their air bags and briefly submerge. 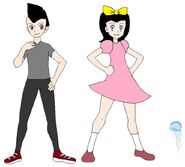 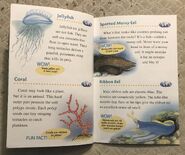