The Parody Wiki
Register
Don't have an account?
Sign In
Advertisement
in: Ocean liners, Characters, Protagonists,
and 8 more

Princess Alice is the most prominent of the three ocean liners to appear. She appeared in three episodes.

In High Winds, she was in need of repairs, and the Stars (and Zebedee) all fought against the heavy winds to bring her safely into port. When she appeared in Regatta, she was fully repaired and was celebrating Independence Day heartily with the other vessels. She was also portrayed as a male, though this easily could have been her captain. She makes a brief cameo in High Tide. She could also be the sister ship to The Duchess as they have the same livery. In Salty's Lighthouse, the Princess Alice became "Princess Anne".

Stylistically, with her Edwardian lines and twin funnels, Princess Alice closely resembles the Canadian vessels Empress of Britain, and her sister Empress of Ireland which sunk in the St. Lawrence River in 1914; she might also be based on the Cunard Line's RMS Queen Elizabeth. Her name also seems to reference another doomed vessel - the Princess Alice. 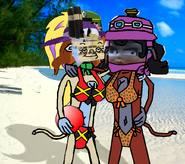 Princess Alice in a bikini with Lillie Lightship 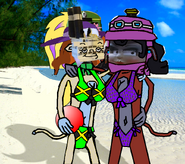 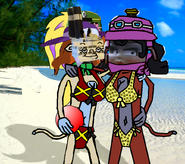 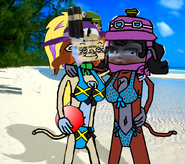