Originally, Amber was cold, spoiled, bratty and envious but knew when to admit her mistakes.

Amber loves her family, especially her father King Roland. She admires Miranda with great affection, even giving her a rose flowered unicorn bush to show how much she cared for her. Even though she tends to manipulate and ignore James, she appears to actually love and care about her brother, judging by her reaction when James says that he likes Sofia better than her, which was the first time that she was shown feeling truly depressed.

As the series has progressed, she is growing to be more responsible, kind and respective towards Sofia by teaching her more about being a princess. She tries keep Sofia out of harm's way as well. And while she is still holding on to her old haughty, vain and spoiled behavior, Amber is steadily improving not only as a princess but as a person as well.

Amber can be a bit bossy, believing that bigger is better and that simple is not good enough. She tends to take over party-planning, believing that she knows best. She has to be reminded that people have their own ways of throwing parties. Her desire to win can also get her into trouble, such as when she cheated to win the school's costume contest. Occasionally, her selfishness, such as wanting her own birthday, causes trouble for others as well. Through the consequences of these actions, they have taught her valuable life lessons. Amber has shown to be very fashion conscious believing that style and beauty are more important than actually competing at times. She admits she likes coaching because it allows her to boss others around.

Like her father, Amber is also naive when it comes to magic due to not really understanding it or knowing how to use it properly as shown when she recklessly used up all three of her wishes and when she accidently activated the Amulet of Avalor's safeguard by stealing it from Sofia.

Amber is a young fair-skinned girl, having blonde hair and amber eyes that gave her her name. She almost always wears a chartreuse gown, red earrings and a crystal tiara inset with peridots, often with a floral deep red fan in her hand. She often wears costumes covered in feathers, except for her butterfly "costume".

Her hair reaches past her shoulders but it is often held in place by a tiara, making it appear a little shorter. The full length of her hair is seen during the nighttime in "The Big Sleepover" and Sofia the First: The Curse of Princess Ivy. It also tangles easily.

She is a Cinderella's stepsister. 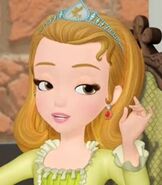 Amber in Sofia the First 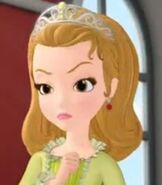 Amber in Sofia the First: Once Upon A Princess 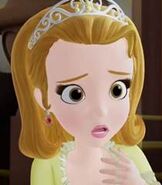 Amber in Sofia the First: The Floating Palace

Amber with a fan

Amber with Sofia and James

Amber and her friends astonished by Ruby and Jade's behavior

"Its just us princesses."

Amber with her Friends Jun, Clio and Hildegard

Amber told Sofia that she only names 138 kingdoms

Amber telling the truth to Hildegard

Amber telling the truth to Hildegard while Jun is watching them

"Do I need to sing the song again?"

The family back in there soft. snugly, cozy royal clothes.

Amber and Sofia hug while singing "Peace and Joy"

Getting along well with Sofia's friends

Sofia and Amber in costumes

Amber's plan not to let James have a choice this year.

"I never needed a spell to lose my patience."

Amber gets a kiss from Baby James

Amber cheering with Clio and Hildegard

"Baileywick is a frog!"

"He's a lot better than Cedric."

"I will do it for daddy, and a little bit for James, but mostly for daddy."

Amber to the rescue

Amber gets a new art kit for Wassallia

Amber with a mustache

Being offered some boots

Amber dressed as a Buttercup

"Amber will miss you too."

"We love our dad"

Amber blows her whistle at Sofia 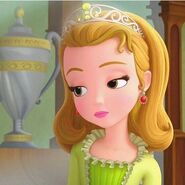 Add a photo to this gallery
Retrieved from "https://parody.fandom.com/wiki/Princess_Amber?oldid=1728535"
Community content is available under CC-BY-SA unless otherwise noted.