Princess Celestia is a character from "My Little Pony: Friendship is Magic".

She is a Earth Kingdom-born Avatar

She is a mandrill

Princess Celestia played Moonbeam in Happily Ever After (Gryffonmanic Style)

She was a Spider

Princess Celestia played The Queen in A Xiaolin's Life

She is the royal ant queen of Ant Island

She is a president

She is a dragon 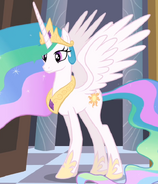 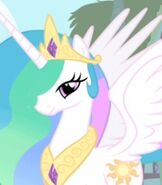 Add a photo to this gallery
Retrieved from "https://parody.fandom.com/wiki/Princess_Celestia?oldid=2209935"
Community content is available under CC-BY-SA unless otherwise noted.