The Parody Wiki
Register
Don't have an account?
Sign In
Advertisement
in: Villains, Females, Girls,
and 45 more

Princess Morbucks is a spoiled little girl and a recurring antagonist on The Powerpuff Girls. She is the daughter of King Morbucks, whose appearance isn't known since he is only seen from the back and below the neck (though it is notable that in Bought and Scold, he wears a robe when going to sleep, he is overweight, has a deep voice, and wears a wedding ring on his finger). She lives in an enormous manor with her father on the outskirts of the City of Townsville. Her last name is a direct reference to the fact that she is very wealthy. She is also known to have somewhat of a lisp (her s's sound like th's. However in "Twas the fight before Christmas" and "See Me, Feel Me, Gnomey). In the episode "Boy Toys" it is revealed that she actually does have a mother because after she finished a phone call, she said to herself, "Man, my mom can be such a pain in the butt." 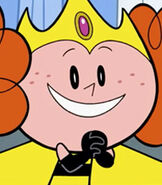 Princess Morbucks in the TV Series (1998) 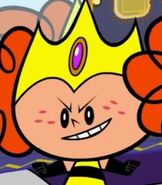 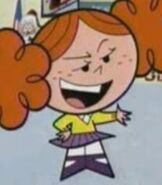 Princess Morbucks in The Powerpuff Girls: 'Twas the Fight Before Christmas 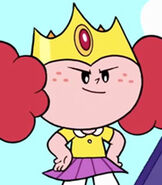 Princess Morbucks in the TV Series (2016) 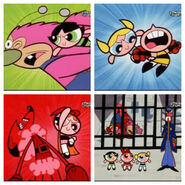