The Parody Wiki
Register
Don't have an account?
Sign In
Advertisement
in: Sofia the First Characters, Characters, Heroines,
and 34 more

Princess Vivian is a shy princess of Zumaria and one of Sofia's friend of Sofia the First.

Vivian is a shy girl who has trouble talking to other people, and as a result had no friends. There were also many false stories made up about her, that she was never able to say weren't true because she wasn't brave enough to say so. But after being partnered with Sofia for a project for art class, the two of them eventually became best friends and Sofia helped Vivian become more confident, and overcome her fear of being around and talking to others.

Vivian is musically talented and her favorite instrument is the mandolin. She is also a talented painter and has a hyperactive, baby blue dragon named Crackle.

He is a girl with a red hood. 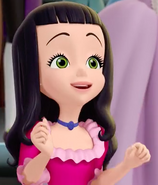 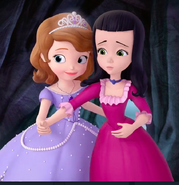 Vivian as the Ape