The Parody Wiki
Register
Don't have an account?
Sign In
Advertisement
in: Characters, Heroes, The Simpsons Characters,
and 21 more

Walter Seymour Skinner or Principal Skinner, formerly known as Armin Tamzarian, is the interim principal of Springfield Elementary School, and a stereotypical educational bureaucrat. He struggles to control the crumbling school and is constantly engaged in a battle against its inadequate resources, apathetic and bitter teachers, and often rowdy and unenthusiastic students, Bart Simpson being a standout example. A strict disciplinarian, Skinner has an uptight, militaristic attitude that stems from his years in the United States Army as a Green Beret, which included service in the Vietnam War, where he achieved the rank of a sergeant, according to his rank insignia. As a result of his service in the Vietnam War, he is often plagued by horrible memories of his involvement via post traumatic stress disorder, sometimes even happening at the most inopportune of times. It's also implied that he received a severe enough injury during the Vietnam War on his posterior to require a metal plate to be installed in it. 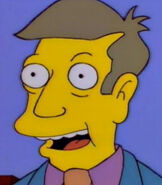 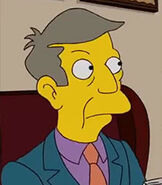 Principal Skinner at the left.
Community content is available under CC-BY-SA unless otherwise noted.