The Parody Wiki
Register
Don't have an account?
Sign In
Advertisement
in: Characters, Animals, Asian Animals,
and 86 more

The proboscis monkey (Nasalis larvatus) or long-nosed monkey is an arboreal Old World monkey with an unusually large nose, a reddish-brown skin color and a long tail. It is endemic to the southeast Asian island of Borneo and is found mostly in mangrove forests and on the coastal areas of the island. This species co-exists with the Bornean orangutan. It belongs in the monotypic genus Nasalis. The proboscis monkey is a large species, being one of the largest monkey species native to Asia. Only the Tibetan macaque and a few of the gray langurs can rival its size. Sexual dimorphism is pronounced in the species. Males have a head-body length of 66 to 76.2 cm (26.0 to 30.0 in) and typically weigh 16 to 22.5 kg (35 to 50 lb), with a maximum known weight of 30 kg (66 lb). Females measure 53.3 to 62 cm (21.0 to 24.4 in) in head-and-body length and weigh 7 to 12 kg (15 to 26 lb), with a maximum known mass of 15 kg (33 lb). Further adding to the dimorphism is the large nose or proboscis of the male, which can exceed 10.2 cm (4.0 in) in length, and hangs lower than the mouth. Theories for the extensive length of their nose suggest it may be sexual selection by the females, who prefer louder vocalizations, with the size of the nose increasing the volume of the call. Nevertheless, the nose of the female is still fairly large for a primate. The proboscis monkey has a long coat; the fur on the back is bright orange, reddish brown, yellowish brown or brick-red.[13][14] The underfur is light-grey, yellowish, or greyish to light-orange. Infants are born with a blue colored face that at 2.5 months darkens to grey. By 8.5 months of age, the face has become cream colored like the adults. The male has a red penis with a black scrotum. Both sexes have bulging stomachs that give the monkeys what resembles a pot belly. Many of the monkeys' toes are webbed. 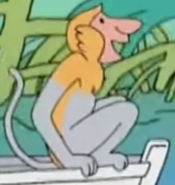 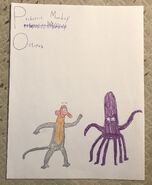 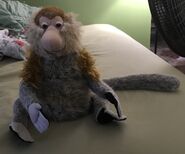 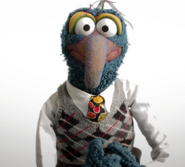