Professor Hubert J. Farnsworth, or simply Professor Farnsworth, is a fictional character in the American animated television series Futurama. The mad scientist proprietor of the Planet Express delivery service for whom the main characters work, he is the great (×30) grandnephew and the great (×31) grandson of series protagonist Philip J. Fry because of time reef paradox. He alternates between intelligence and amoral senility due to his greatly advanced age. He demonstrates a mastery of any field of science necessary for the series' plots and is suggested to be one of the most brilliant inventors on Earth. However, he falls asleep constantly, and he is implied to have routinely sent his former crews on suicide missions. 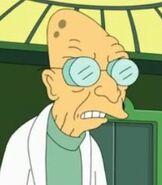 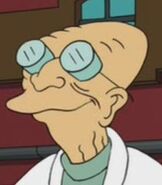 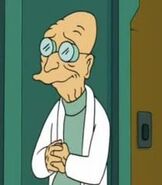 Add a photo to this gallery
Retrieved from "https://parody.fandom.com/wiki/Professor_Hubert_J._Farnsworth?oldid=2417562"
Community content is available under CC-BY-SA unless otherwise noted.