Professor Quack is the quirky duck scientist of the Spy Corps. Moblie Command Center. He fills the spy gadget vending machine with a variety of tools SPY Fox will need for his mission. He creates blueprints to explain each gadget, and then eats the blueprints after. One must assume that he has a never ending supply of blueprints. Professor Quack is a parody of Q in the James Bond franchise.

Given his green colored body and the white ring around his neck, it's possible that Professor Quack is a Mallard.

Prior to his arrival, Professor Quack gave Monkey Penny drachmas and a laser toothbrush for SPY Fox to use on his mission. Professor Quack appears inside headquarters after SPY Fox rescues Mr. Udderly, where he has also subsequently fixed the SPY Corp vending machine. He will from that point onward explain how the gadgets work.

Quack accompanies SPY Fox when they catch Russian Blue red-handed trying to steal the famous Limburger cheese. When she escapes, SPY Fox goes after her in his SPY scooter with Quack following the two behind them.

Later at the ending, Russian Blue gets a dry mouth after eating so much of the limburger cheese so she goes to get a large frosty beverage at a nearby restaurant. Unbeknownst to her, Quack had set up shop here. When she goes to order a drink, Quack purposely gets what she tells him wrong multiple times to give SPY Fox enough time to get in Russian Blue's helicopter and cuff her with a rigged drink.

Note: Professor Quack's quotes are spoken with a British accent. 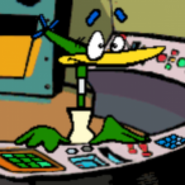