The Parody Wiki
Register
Don't have an account?
Sign In
Advertisement
in: Males, Male Characters, Characters,
and 15 more

Robert Callaghan (also known as Yokai) is the main antagonist of Disney's 2014 animated feature film, Big Hero 6. He was the head robotics professor at the San Fransokyo Institute of Technology and mentor to Tadashi Hamada. After suffering a personal tragedy, he became a silent, kabuki masked supervillain bent on exacting vengeance, with an army of Microbots at his command.

He was the founder of Oscorp and later became one of Spider-Man's first supervillains, the Green Goblin.

He or She is a tiger.

Yokai is played by Moloch in Big Hero 7

Yokai is played by Cruella De Vil in Big Heroine 6

Callaghan is played by The Coachman in Big Clan 6 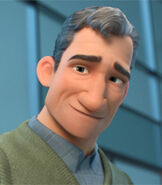 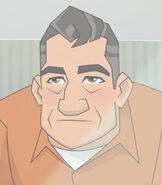