Prototype Jack, seen as different from the main line of the Jack series, was created and designed by Doctor Bosconovitch as the prototype model of the main Jack series. 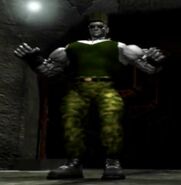 Tekken 2 (1995)
Add a photo to this gallery
Retrieved from "https://parody.fandom.com/wiki/Prototype_Jack?oldid=1797371"
Community content is available under CC-BY-SA unless otherwise noted.