The Parody Wiki
Register
Don't have an account?
Sign In
Advertisement
in: Villains, Antagonists, Birds,
and 28 more

Pterano is the main antagonist turned anti-hero in The Land Before Time sequels. He first appears in The Land Before Time VII: The Stone of Cold Fire. He is a Pteranodon, called a "Flyer" in the films and TV series, and is Petrie's long lost uncle. He is related to Petrie on his mother's side, being her brother. He is the brother of Petrie's Mother, the uncle of Petrie and his siblings and Rinkus and Sierra's former boss.

In the TV show, Pterano was mentioned a few times.

He is voiced by Michael York. There was a rumour that Pterano was going to appear again in The Land Before Time XII: The Great Day of the Flyers, however, he did not appear in that film

He appears as himself in Clash of the Links

He is completely the same character as he was before, but is now a reformed good pteranodon, but still looking cool and is now a friend to Richard Sharpe.

He played Rodan in Speckleszilla: King of the Monsters (2019)

He is a giant Pteranodon. 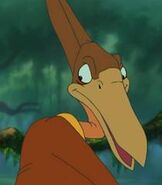 Pterano striking a Deal with Littlefoot