The Parody Wiki
Register
Don't have an account?
Sign In
Advertisement
in: Characters, Animals, Asian Animals,
and 20 more

As its common name suggests, the pygmy hog (Porcula salvania) is the smallest of all the pig family; it is also the most endangered. These small hogs have relatively short limbs, the back is short and rounded and the tail is extremely short. The coat is grey brown along the back and pale on the underparts, it is longest behind the shoulders. Newborns are greyish pink in colour, later developing a brown coat with faint ochre stripes before attaining adult colouring. Adult males are larger and more robust than females; they have visible tushes (canine teeth) and a band of dark hair along the ridge of the nose. Soft grunting calls are used to maintain contact between individuals within their dense habitat. Recently, genetic evidence has shown that the pygmy hog is the sole member of the genus Porcula, and is not a member of the genus Sus, which contains the domestic pig. 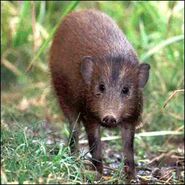 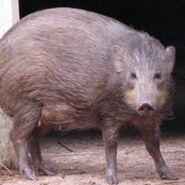