The Parody Wiki
Register
Don't have an account?
Sign In
Advertisement
in: Tangled Characters, Characters Who Got Sick, Mothers,
and 6 more

Queen Arianna is the queen of Corona and one of the supporting characters of the Tangled franchise. She is Rapunzel's birth mother, and wife of King Frederic.

Queen Arianna wears a traditional Corona dress. The dress is lavender in color and reaches all the way down to her feet. Arianna also wears pearl earrings, a pearl necklace, and often, when in official ceremonies, her crown. Arianna has long, silky brown hair that extends past her shoulders. She is quite slender and is remarkably similar to her daughter in appearance. She also shares many physical features with her younger sister.

Queen Arianna She's wearing a Count Dracula outfit, with A black tuxedo, with white shirt, red medallion, white vest and white gloves, a black cape with red lining and red collar. Then She became a wicked villain. It's inspiration for the 1931 movie Bela Lugosi's Dracula.

In Tangled, Arianna is shown to love her daughter and her husband dearly: when Rapunzel is born, she smiles adoringly, cuddling and picking her up. She then silently comforts her husband on the day of the lantern festival, gently touching his face when he cries. These scenes show that she is caring, supportive, and kindly. She is also shown to be very accepting, immediately welcoming Eugene into the royal family upon realizing he was partially responsible for her daughter's return.

Arianna's personality is slightly expanded in Tangled: Before Ever After, where her loving and supportive nature is emphasized by her way of raising Rapunzel — especially compared to her husband. Unlike the paranoid Frederic who fears for Rapunzel's safety nearly every waking moment, Arianna simply relishes in having a complete family once more. She also sympathizes with Rapunzel's longing to learn more about the world, and herself, and encourages her to do just that. Gentle and soft-spoken, Arianna quickly established herself as someone Rapunzel can confide in during times of uncertainty.

In regards to Rapunzel and Frederic's somewhat strained relationship, Arianna advice Frederic to lower his defenses and trust that their daughter will prevail as a wise ruler when her time comes. She openly believes the idea that teenagers are a rather complex age-group that requires patience and understanding from the parent, to properly develop; this would explain why her methods of raising Rapunzel are considerably less controversial, compared to her husband, despite the fact that they both love their daughter, immensely.

It is shown later, on that she and Rapunzel have developed a deep mother-daughter bond. In "Fitzherbert P.I., Arianna gave motherly wisdom about how Rapunzel should best portray herself in her royal portrait, explaining that people aren't defined by what they can do, but by who they are and the people they love; in response, Rapunzel painted the portrait, herself, which depicted the Princess with her mother.

She played as Amelia Harvey in Astro Boy (Casper) 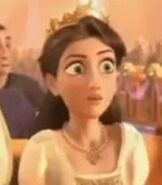 Arianna on the beach in her swimsuit

Arianna as a WWE-type fan

Arianna reunited with her sister Willow