Rabbit is one of the primary main characters in the show Skunk Fu! played by Paul Tylak. He is a male grey and white rabbit. He is noted to be in his twenties but this is not proven in the show there for he and Fox are debatably in their twenties or teenagers. He is a negative influence for Skunk.

He is a Alien

He is a Revel

Rabbit Plays Sparx in The Legend of Skunk

He is a Red american squirrel

He is a Sloth

He is a Gingerbread Man

Rabbit Plays Lumiere in Beauty and the Hyena

He is a Candelabra 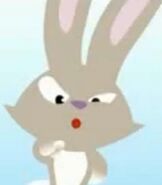 Add a photo to this gallery
Retrieved from "https://parody.fandom.com/wiki/Rabbit_(Skunk_Fu)?oldid=2564278"
Community content is available under CC-BY-SA unless otherwise noted.