Rachael Bunny, a long lost cousin of Lola Bunny. Along with Ruby Bunny, Lily Bunny, Cherry Bunny, Strawberry Bunny, Liy Bunny, July Bunny, June Bunny, Blossom Flower Bunny, Morganite Bunny and Lisa Bunny as their deceased cousins, She was Lola Bunny's only cousin, since her 10 cousins got eaten from a creature, She has a dog named Chloe. She is also Lola Bunny's identical twin, but she is actually a same self person of Lola Bunny. Her personality was as Lori Loud. Kayla thinks that Rachael Bunny's friends dropped Rachael bunny on her head, and made her changed.

Her hair is blonde like Lola Bunny, Her shirt has 3 yellow lines in her right. She also has blue jeans. And she wears a hat like Dil Pickles in All Grown Up.

In some explorer/summer episodes, her shirt will be pink and will have a kitty cat t-shirt will have no yellow lines in her shirt, her jeans will still be still blue.

She’s most known for having almost every single job in one series, The Powerpuff Girls Future, saved a few such as working in the ACME headquarters and sending free food to homeless people. But still Lola Bunny is retired at selling perfume and she now works at sewing clothing and pillows. Rachael Bunny looks identical to her sister Lola Bunny.

Lola and Rachael are twins and best friends, they are also twin sisters, Rachael is saddened by Lola’s success because she feels that she and Lola are growing apart and that she will be forgotten when Lola becomes famous. So she decides to spend as much time with Lola as she possibly can, much to Lola’s annoyance. Finally Lola cracks and tells Rachael that she is acting ridiculous and that nothing between them as twin sisters was going to change. Despite this, Rachael cannot help but feel that she will eventually be forgotten, so she decides to begin preparing for a life without Lola. They always think of each other as face to face and never as people but ever since The Powerpuff Girls Future Episode 22 where Rachael apologize to Lola and does a Team Dil Pickles Alliance handshake. 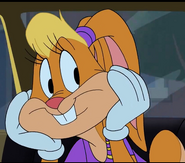 My Prototype Version of Rachael Bunny 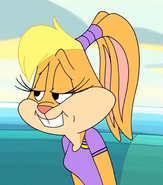 Rachael Bunny in her exploring/summer outfit 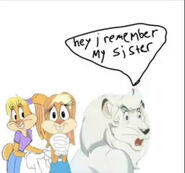 Image in Lola Bunny and the White Lion Part 7

Rachael Bunny with her hat on

Lola and Rachael are looking at the pie

Retrieved from "https://parody.fandom.com/wiki/Rachael_Bunny?oldid=2640832"
Community content is available under CC-BY-SA unless otherwise noted.