Rasputin is the scariest man in Anastasia.

Rasputin played Lord Maliss in Happily Ever After (Gryffonmanic Style)

He is an Evil Grasshopper

Rasputin Played Saruman in The Lord of the Rings (TheNamelessDoll Style)

Rasputin Played Gaston in Beauty and the Horse

He is a maneless lion

In Vixeystasia he is played by Steele

In D.W. (Anastasia) he is Played by John Worthington Foulfellow (Honest John)

In Nalastasia and Destinystasia he is Played by Shere Khan

In Teodorastasia (1997) He is played by Jafar

In Isabellastasia he is Played by Judge Claude Frollo

In Vanessastasia he is Played by Cat R. Waul

In Beauty and the Tyrannosaur, he play Gaston. 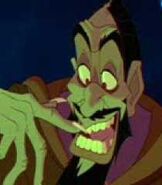 Retrieved from "https://parody.fandom.com/wiki/Rasputin?oldid=1807618"
Community content is available under CC-BY-SA unless otherwise noted.