Ray Ray Lee is Juniper's hyperactive eight-year-old little brother. Like Juniper, Ray Ray can see through the magic barrier, though this is not a naturally-occurring ability as it is later revealed in the series. He is rambunctious, imaginative and creative, but can often get in the way of Juniper's goals on her work field, many times even being too snarky or sarcastic in a situation to take it seriously. Despite this, he is always ready to support June in anything she does. He was voiced by Kath Soucie.

He is hyperactive and careless, and often gets himself into trouble when dealing with the magic world. Ray Ray is often over-eager in regards to the magic world, finding every single event involving it, no matter how bad or ominous, to be "cooool." A recurring joke about him is asking if he has ever run out of energy, with a response of, "No, but there's always a first time."

He also has a sibling rivalry relationship with Juniper, although it is often seen that he cares for her deeply. In the episodes after "O Brother, What Art Thou?", Ray Ray could actually be termed a "homunculus", in the sense that his mind having been transferred to an artificial body after accidentally transmogrifying his original body into a massive monster by him drinking a growth potion that was supposed to make a giant grow back to his proper size.

In "Meet the Parent", Monroe states that Ray Ray has a bladder control problem, though this has never been confirmed, save in "The World According to L.A.R.P" when Juniper said that he wet his pants on the jungle gym once, and again in "Dream Date" where he has trouble making it to the bathroom after drinking punch. Since he is very young still, it is probable he will outgrow these tendencies. In the episodes after "Star Quality", he is occasionally seen watching monster TV. All throughout the series he is seen being friendly or on camaraderie-like terms with many monsters, sometimes getting a whiff plots or schemes before his sister, or even Monroe thanks to his social awareness of monsters. In "Te Xuan Me?", where after Juniper was erased from all time and knowledge he discovered that he was the Te Xuan Ze, had been skilled at it in that timeline and became particularly skilled at his position, even earning Monroe's praise. However, after everything was set back to normal, Ray Ray started to study magic and spells as a way to help his sister in future battles.

Since the episode "Feets Too Big", it has been seen time and again that he has a crush on Lila, the Sasquatch.

Due to an accidental power-transfer he had when June gained magic and chosen as the next Te Xuan Ze, he has a fraction of magic of his own, but so far it only enables him to see through the magic veil and see magical creatures. When Juniper first gained her heir to the mantle of Te Xuan Ze, a group of demons attempted to drain her powers. Ray Ray unwittingly intervened, causing some of her powers to transfer to him, as seen in "Adventures in Babysitting". Whether or not he'll gain other powers similar to hers remains to be seen, as Ah-Mah has implied that he may over time.

In a later episode, he is seen using a Ronak Stone, a type of banishment item, well enough to recognize that it was out of energy. He's been seen using different projectile tools as well, such as wands and staffs. Throughout seasons, he is also seen to have some leading and communication skills, especially with monsters. These skills also aid him in the battle in the finale.

Ray Ray also seems to be extraordinarily good at impressing common monster-folk[1] and even some villains with his antics and personality, often even managing to negotiate or come to other solutions in a conflict. Ironically, in these ways he somewhat surpasses June in monster communication skills.

Appearance in other media 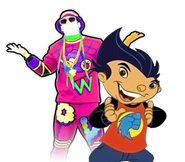 Ray Ray as he appeared on Just Dance 2021 with his sister Juniper Lee, and Monroe for the song Samba De Janeiro.
Community content is available under CC-BY-SA unless otherwise noted.