The Parody Wiki
Register
Don't have an account?
Sign In
Advertisement
in: Characters, Raya and the Last Dragon characters, Humans,
and 9 more

Raya is the titular protagonist of Disney's 2021 animated feature film, Raya and the Last Dragon. The daughter of Chief Benja, she is the princess of Kumandra's Heart Land. In her youth, Raya was appointed the Guardian of the Dragon Gem. When the Gem is broken, a plague known as the Druun was unleashed upon the world, turning much of humanity into stone—including Benja. To save her father, Raya embarked on a quest to retrieve the Gem pieces and use its power to vanquish the Druun for good.

Raya is a headstrong young woman who is mature and wisened for someone her age. She is a very capable person and is shown to easily adapt to situations around her. Despite her maturity, she retains a sense of humor and occasionally shows a bit of playfulness when such a moment presents itself. She deeply cares for her father and has a strong emotional attachment to certain people she considers her friends. Her biggest flaw is her inability to trust others. Except for Sisu, many of her new allies are immediately deemed suspicious or sinister in her eyes. Over time, she learns to overcome these issues and can see when someone is truly good. Raya is a very focused individual and is determined to see things through to the end. 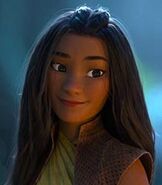 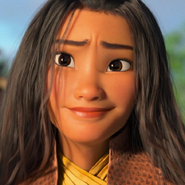