Reader Rabbit appears in all Reader Rabbit titles except for Interactive Math Journey and the Read Now! series. His first appearance was in the 1983/4 Apple II version of Reader Rabbit and the Fabulous Word Factory. The first game he was voiced in was Talking Reader Rabbit. Reader Rabbit 2 shows that his residence is a treehouse.

He loves reading and going on reading adventures with his friends. He is very helpful and nice.

Reader Rabbit has many friends, but his best friends are Sam the Lion, Mat the Mouse, Paige, and Chester. 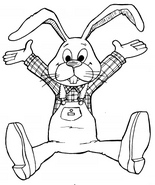 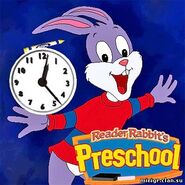 Retrieved from "https://parody.fandom.com/wiki/Reader_Rabbit?oldid=2566049"
Community content is available under CC-BY-SA unless otherwise noted.