Rebecca is an upcoming character set to debut in the twenty-second season. She is a large tender engine who originates from the Mainland she is paxtons girlfriend.

Rebecca, a yellow tender engine, comes from the Mainland. Rebecca is not afraid to stand up for herself and isn't intimidated by the older engines. Plus she’s Gordon’s long lost daughter

Rebecca is based on the Southern Railway "West Country" class, a class of 4-6-2 tender locomotive designed by Oliver Bulleid and built between 1945 to 1951. These engines were used as mixed-traffic locomotives, and were used for a wide variety of jobs. Ten members of the class have been preserved, with one of them even working on the Bluebell Railway.

Rebecca is painted yellow and navy with white lining. Her wheel rims are painted white, her front end is painted red and she has red and orange stripes painted along her sides. Rebecca also carries two blue nameplates with white writing, and the letters NWR written on her tender.

Rebecca will appear in Season 22.

Rebecca is likely to appear in Big World! Big Adventures!. 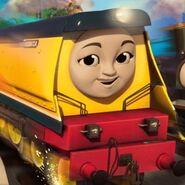 Rebecca with the Steam Team
Add a photo to this gallery

Retrieved from "https://parody.fandom.com/wiki/Rebecca_(Thomas_%26_Friends)?oldid=1932462"
Community content is available under CC-BY-SA unless otherwise noted.