The Parody Wiki
Register
Don't have an account?
Sign In
Advertisement
in: Characters, Animals, South American Animals,
and 23 more

The red-legged seriema or crested cariama (Cariama cristata) is a mostly predatory terrestrial bird in the seriema family (Cariamidae), included in the "Gruiformes" in the old paraphyletic circumscription, but increasingly placed in a distinct order Cariamiformes (along with three extinct families). The red-legged seriema inhabits grasslands from Brazil south of the Amazon to Uruguay and northern Argentina. The area over which it occurs is estimated at 5.9 million km², though the bird is not found everywhere in this region of course. The species is absent from the Mata Atlântica and planalto uplands along the coast of Brazil. 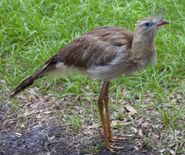 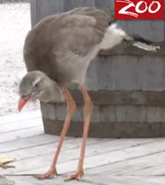