The red-shanked douc (Pygathrix nemaeus) is a species of Old World monkey, among the most colourful of all primates. This monkey is sometimes called the "costumed ape" for its extravagant appearance. From its knees to its ankles it sports maroon-red "stockings", and it appears to wear white forearm length gloves. Its attire is finished with black hands and feet. The golden face is framed by a white ruff, which is considerably fluffier in males. The eyelids are a soft powder blue. The tail is white with a triangle of white hair at the base. Males of all ages have a white spot on both sides of the corners of the rump patch, and red and white genitals. The word "douc" is a Vietnamese word meaning "monkey". The douc is an arboreal and diurnal monkey that eats and sleeps in the trees of the forest. 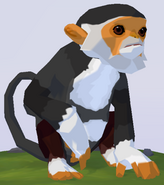