Red is a large red block-like friend with two bulky arms. He is 8 feet tall, weighs 400 pounds. Red was created by Terrence in an effort to get rid of Bloo, who only appeared in "Seeing Red". Even though he was created for the purpose of smashing Bloo, he is actually really nice and now is shown to strongly dislike his creator.

Red is a large red block with blocky fists. He has thick arms and no legs, although he is able to hop around. He has a large unibrow and large eyes with small pupils. He has a wide mouth and bulky teeth (which look similar to Terrance's).

Red initially appeared as an aggressive, hulking imaginary friend who wanted to smash things. Red is also not very intelligent. Despite Terrence's instructions, Red does not know how to hurt things (when told to "smash Bloo", he found a bunch of flowers and smelled them.) Beneath the hard exterior, Red is very sensitive. He took great delight in feeding the imaginary fish friends, dancing for the imaginary bees and complimenting the imaginary ponies. When he believes that no one likes him, he quickly grows miserable and is even more devastated when he accidentally crushes some flowers.

Despite Terrence being his creator, Red was initially only neutral towards Terrence. He wasn't sure how to do what Terrence requested, but learned quickly. He then went to go deal with Bloo. Later, Terrence berates him for being nice to Bloo and crushes the flowers that Bloo gave him. This makes Red absolutely furious. He says that he doesn't like what Terrence is saying, insists that he's not a bad mean person and that "RED NICE GUY!!" He throws Terrence.

When told to smash Bloo, Red assumed that Terrence wanted him to smell flowers, implying that he wasnt a very dangerous, mean guy at all. Bloo realized that Terrence created Red, so he tries to beat Red around by taking him to the stables, the beehive and the fishtank. Bloo eventually realizes that Red isn't all bad, and he apologizes.

Red immediately becomes friends with Bloo, and he defends him from Terrence. In the credits, he is seen with the man in the cellphone suit, trying to call Bloo.

Red didn't interact with Mac at all during the episode, as while he and Bloo were together, Terrence was bullying Mac. However, after throwing Terrence away, he hugs Bloo and Mac both, declaring that they were his friends.

Red is extremely heavy, weighing 400 pounds, and because he jumps everywhere, he shakes the ground every time he moves. He is very strong, able to fling Terrence a massive distance and break down the doors to the home. 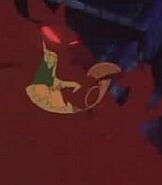 Gfr.jpg
Asderg.jpg
Add a photo to this gallery
Retrieved from "https://parody.fandom.com/wiki/Red_(Foster%27s_Home_For_Imaginary_Friends)?oldid=2060411"
Community content is available under CC-BY-SA unless otherwise noted.