The Parody Wiki
Register
Don't have an account?
Sign In
Advertisement
in: Characters, Animals, European Animals,
and 83 more

The red deer (Cervus elaphus) is one of the largest deer species. The red deer inhabits most of Europe, the Caucasus Mountains region, Asia Minor, Iran, parts of western Asia, and central Asia. It also inhabits the Atlas Mountains region between Morocco and Tunisia in northwestern Africa, being the only species of deer to inhabit Africa. Red deer have been introduced to other areas, including Australia, New Zealand, the United States, Canada, Peru, Uruguay, Chile, and Argentina. In many parts of the world, the meat (venison) from red deer is used as a food source. Red deer are ruminants, characterized by a four-chambered stomach. Genetic evidence indicates that the red deer, as traditionally defined, is a species group, rather than a single species, though exactly how many species the group includes remains disputed. The closely related and slightly larger American elk or wapiti, native to North America and eastern parts of Asia, had been regarded as a subspecies of red deer, but recently it has been established as a distinct species. The ancestor of all red deer, including wapiti, probably originated in central Asia and resembled sika deer. Although at one time red deer were rare in parts of Europe, they were never close to extinction. Reintroduction and conservation efforts, such as in the United Kingdom and Portugal, have resulted in an increase of red deer populations, while other areas, such as North Africa, have continued to show a population decline. The male (stag) red deer is typically 175 to 250 cm (69 to 98 in) long and weighs 160 to 240 kg (350 to 530 lb); the female (hind) is 160 to 210 cm (63 to 83 in) long and weighs 120 to 170 kg (260 to 370 lb). The tail adds another 12 to 19 cm (4.7 to 7.5 in) and shoulder height is about 95 to 130 cm (37 to 51 in). In Scotland, stags average 201 cm (79 in) in head-and-body length and 122 cm (48 in) high at the shoulder and females average 180 cm (71 in) long and 114 cm (45 in) tall. 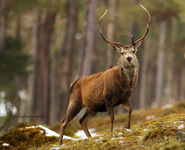 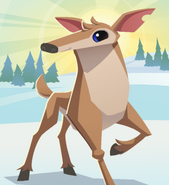 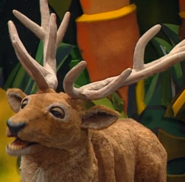 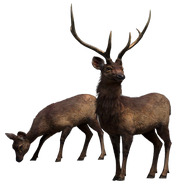 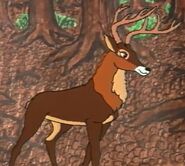 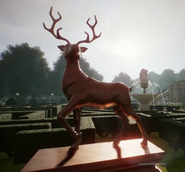 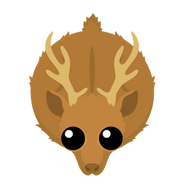 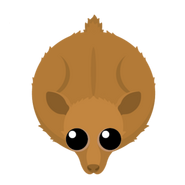