The Parody Wiki
Register
Don't have an account?
Sign In
in: Characters, Animals, North American Animals,
and 309 more

The size of a small dog, the red fox (Vulpes vulpes) is the largest member of the genus Vulpes and is well-known for its large bushy tail, which is often tipped with white. The fur is variable in colour, but is usually reddish-brown to flame-red above and white to black below; the lower limbs and the back of the ears are often black. Red foxes can produce 28 different vocalisations. The red fox’s tail is known as a brush, and can be used by the fox as a warm cover in cold weather. The male red fox is referred to as a dog, while the female is known as a vixen. 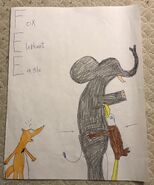