The Parody Wiki
Register
Don't have an account?
Sign In
Advertisement
in: Pages with broken file links, Characters, Animals,
and 7 more

The red king crab (Paralithodes camtschaticus), also called Kamchatka crab or Alaskan king crab, is a species of king crab native to the far northern Pacific Ocean, including the Bering Sea and Gulf of Alaska, but also introduced to the Barents Sea. It grows to a leg span of 1.8 m (5.9 ft), and is heavily targeted by fisheries. The red king crab is the largest species of king crab. Red king crabs can reach a carapace width up to 28 cm (11 in), a leg span of 1.8 m (5.9 ft), and a weight of 12.7 kg (28 lb). Males grow larger than females. Today, red king crabs infrequently surpass 17 cm (7 in) in carapace width and the average male landed in the Bering Sea weighs 2.9 kg (6.4 lb). It was named after the color it turns when it is cooked rather than the color of a living animal, which tends to be more burgundy. The red king crab is native to the Bering Sea, North Pacific Ocean, around the Kamchatka Peninsula and neighboring Alaskan waters. It was introduced artificially by the Soviet Union into the Murmansk Fjord, Barents Sea, during the 1960s to provide a new, and valuable, catch in Europe. Red king crabs have been seen in water temperatures that range from −1.8 to 12.8 °C (28.8–55.0 °F), with typical being 3.2 to 5.5 °C (37.8–41.9 °F). Immatures prefer temperatures below 6 °C (43 °F). The depth at which it can live has much to do with what stage of its lifecycle it is in; newly hatched crab (zoea larvae) stay in the shallower waters where food and protection are plentiful. Usually, after the age of two, the crabs move down to depths of 20–50 m (66–164 ft) and take part in what is known as podding; hundreds of crabs come together in tight, highly concentrated groups. Adult crabs are found usually more than 200 m down on the sand and muddy areas in the substrate. They migrate in the winter or early spring to shallower depths for mating, but most of their lives are spent in the deep waters where they feed. 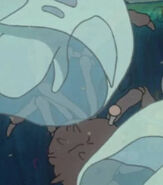