The Parody Wiki
Register
Don't have an account?
Sign In
Advertisement
in: Characters, Animals, Australian Animals,
and 17 more

The redback spider (Latrodectus hasseltii) is a species of venomous spider indigenous to Australia. It is a member of the cosmopolitan genus Latrodectus, the widow spiders. The adult female is easily recognised by her spherical black body with a prominent red stripe on the upper side of her abdomen and an hourglass-shaped red/orange streak on the underside. Females have a body length of about 10 millimetres (0.4 in), while the male is much smaller, being only 3–4 mm (0.12–0.16 in) long. Mainly nocturnal, the female redback lives in an untidy web in a warm sheltered location, commonly near or inside human residences. It preys on insects, spiders and small vertebrates that become ensnared in its web. It kills its prey by injecting a complex venom through its two fangs when it bites, before wrapping them in silk and sucking out the liquefied insides. Male spiders and spiderlings often live on the periphery of the female spiders' web and steal leftovers. Other species of spider and parasitoid wasps prey on this species. The redback is one of fewarachnids which usually display sexual cannibalism while mating. The sperm is then stored in the spermathecae, organs of the female reproductive tract, and can be used up to two years later to fertilise several clutches of eggs. Each clutch averages 250 eggs and is housed in a round white silken egg sac. The redback spider has a widespread distribution in Australia, and inadvertent introductions have led to established colonies in New Zealand, Japan, and in greenhouses in Belgium. 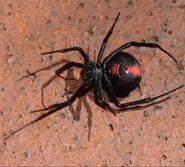 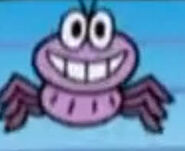 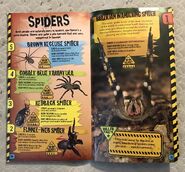