A very large, graceful ray, the reef manta ray (Manta alfredi) is a distinctive fish with triangular pectoral ‘wings’ and paddle-like lobes which extend in front of the mouth. Known as cephalic lobes, these are forward extensions of thepectoral fins which form a funnel-like structure while feeding, helping to channelplankton-rich water into the mouth. The cephalic lobes are rolled into a spiral when the reef manta ray is swimming. Although smaller than its close relative the giant manta ray (Manta birostris), the reef manta ray still grows to an impressive size. Females are around a third larger than males, probably as an adaptation to allow them to give birth to large pups. The disc-like body of the reef manta ray is just over twice as wide as it is long, and ends in a slender, whip-like tail. There is a small dorsal fin on the reef manta ray’s back. The broad, rectangular mouth is located at the front of the head and has rows of tiny, peg-like teeth on the lower jaw, while the eyes are located on the side of the head and the gills open on the underside of the body. The reef manta ray is quite variable in appearance, but most individuals belong to a ‘chevron morph’, which is mainly black above and white below, with large white ‘shoulder’ patches. The white patches form a ‘Y’ shape on top of the reef manta ray’s head, and fade into the black of the back. There may also be pale colouration on the tips of the pectoral fins. The underside of the reef manta ray is predominantly cream to white, with variable numbers of black to blue-grey spots. These spots vary in size and can be seen across most of the underparts, although most patterning occurs between the gills, on the abdomen and across the rear half of the pectoral fins. There are also pale to dark charcoal-coloured bands on the rear edge of the pectoral fin, while the reef manta ray’s mouth is white to light grey. A ‘black morph’ of the reef manta ray also occurs, which is completely black above and almost totally black below, except for a white patch of variable size around the gills and on the abdomen. Black spots can often be seen within this white patch. ‘Chevron’ mantas that appear almost entirely white from above have also been observed. Reef manta rays vary considerably in their spot patterns and in the patterning on the back, and this, together with unique patterns of scars, can be used to identify individuals. Although previously considered to be a single species, manta rays have now been divided into two distinct species, the reef manta ray and giant manta ray, based on differences in size, appearance, habitat, behaviour and genetics . As well as being smaller, the reef manta ray lacks the non-functional tail spine of the giant manta ray, and its white shoulder patches form a ‘Y’ rather than a ‘T’ shaped pattern. The white patches also fade into the black of the back rather than being distinct. Reef manta rays also differ in having spots across the whole of their underside, and in having a white or grey rather than black mouth. Studies have suggested that a third species of manta ray may exist, but more evidence is needed before the species can be split further. Despite its large size, the reef manta ray feeds on some of the tiniest organisms in the ocean. Reef manta rays often jump clear of the water, perhaps to remove parasites or as a form of communication or even play. The reef manta ray has a remarkable ability to regenerate its tissues after being attacked by a predator. 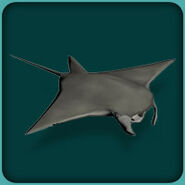 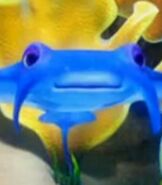 Retrieved from "https://parody.fandom.com/wiki/Reef_Manta_Ray?oldid=2480791"
Community content is available under CC-BY-SA unless otherwise noted.