The Parody Wiki
Register
Don't have an account?
Sign In
Advertisement
in: Females, Female Characters, Characters,
and 39 more

Riley Anderson is a major character in the 2015 Disney/Pixar animated film Inside Out. She is a twelve year old girl (eleven during the film) who loves ice hockey. She was uprooted from her happy and simple life in Minnesota and taken to San Francisco, California, where she experiences various changes in her life. Her emotions (Joy, Sadness, Fear, Disgust and Anger) help her through this tough time, ensuring her well-being.

She plays Mary Jane Watson in Spider-Man 1, 2 and 3

Mary Jane Watson is an actress who grew up next door to Peter Parker.

She plays Suellen O'Hara in Gone with the Wind (PrinceAnarioandPrincessOrianaRockz Style)

She plays Robyn Starling in Alex & Piglet: The Movie

She plays Young Nala in The Viking King on Broadway

She is a girl.

She plays Regan MacNeil in The Exorcist (Hellfire44 Style)

She played Belle in Beauty and the Wolf (Baddwing Style)

She played Aquatta in The Little Mer-Camille

Riley Andersen playing in Petunia in Cartoons/Inside Out 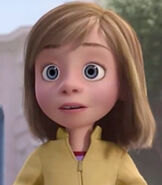 Riley Andersen in Inside Out 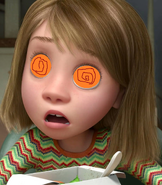 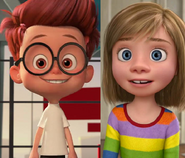 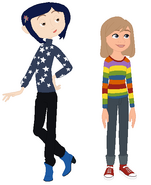 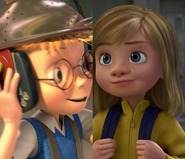 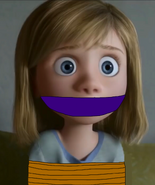 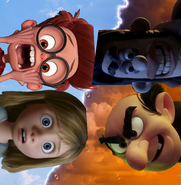